🧵 A Multitude of Legacies 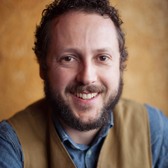 Dear Friends, We have finally made it to October and fall here in North Carolina and I am grateful fo